What’s included in the components of a circuit board

What’s included in the components of a circuit board 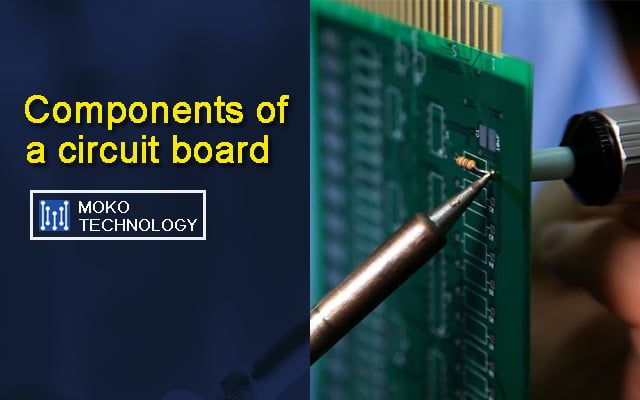 We are lucky to live in a time where there is an abundance of electronic gadgets. However, these electronic devices are only brought to us due to the amazing components of a circuit board. We often wonder what makes an electronic device function so successfully and how it is put together. Electronic devices are such a wonderful thing as you never see anything happening withing them yet you get to witness the things they can do. In this article, we will discuss the wonders of PCBs and how they are possible through the components of a circuit board.

1. Resistors as components of a circuit board

We often use resistors in most of our PCB projects and most of us are familiar with their functionalities. Resistors are among those components of a circuit board which we use most frequently. They are quite popular and are quite easy to use. A resistor basically hinders the flow of current. Hence, a resistor aides in dissipating electric power in the form of heat. There are various types of resistors and there are different categorization methods. Resistors often differ in their manufacturing material as we use different materials for different purposes.

Another way the resistors differ is the way leads come out of them. In this regard, the most common type is the axial resistors. Electronic enthusiasts, beginners, and hobbyists often love to use axial resistors because they are easy to integrate within any circuit. Every resistor has circular rings around it. These rings are a color code that indicates the resistance value of that particular resistance. These rings also tell us about the possible tolerance of the resistor in question.

2. Capacitors as components of a circuit board

After resistors, capacitors are perhaps the most common components of a circuit board. Capacitors are among the top choices of PCB enthusiasts as well. However, we use capacitors less in comparison to resistors. The basic function of a capacitor is to store charge in it. A capacitor includes two metallic plates which have a dielectric between them. The two plates store opposite charges while the dielectric helps in separating them. When we place the capacitor within a circuit then it releases the charges. In this way, a current starts flowing through the circuit.

3. Inductors as components of a circuit board

Inductors are one of the three members of the passive linear components of a circuit board. The other two are the capacitors and the resistors. Inductors also primarily serve to store energy in them. However, they store energy by generating a magnetic field whereas a capacitor stores energy by using electrostatics. There are many types of inductors out there, some of them are simple while some are complex. However, a metallic coil is the most common and simplest to understand inductor one can ever come across. The magnetic field which the coil can produce depends on the number of turns in the coil. Consequently, the larger the number of turns, the greater is the inductance.

We often see inductors wound around some magnetic core. The magnetic cores are available in different forms and sizes. The primary purpose of this core is to enhance the magnetic field when current passes through the conductor. Hence, this magnetic core allows us to screen or completely block particular signals. This is very useful for us as we can employ it for a number of applications. These applications include reducing interference in communication equipment and increasing the lifespan of batteries etc.

4. Potentiometers as components of a circuit board

We often use rotary potentiometers in daily life applications. One of the most common applications is their use in the circular volume controllers on music players and similar audio equipment. They work by controlling the amount of current they allow to pass towards the amplifiers. We often rely on potentiometers when we are designing sophisticated equipment whose performance requires variability through fine-tuning.

5. Transformers as components of a circuit board

They are among the most important components of a circuit board. Transformers primarily serve to transfer the electric energy from one set up to the other. As we transfer electric energy across multiple setups, it either increases or decreases. The increase or decrease is often observable in the voltage. Experts often think of like a transformation in voltage. Transformers include a metallic core similar to the ones we see in common inductors. There are always a number of coils around the metallic core. There are at least two coils and one of them serves as the secondary coil and the other acts as the primary coil. The secondary coil refers to the set up where electric energy will pass on. However, the primary coil refers to the set up from where the electric energy comes from.

We often get to see transformers on large telegraph poles. These are known as industrial transformers and they serve to decrease the voltage as it passes through the lines. This decrease is often in the range of hundreds of thousands. Hence, this voltage becomes usable in our daily lives and common households through the use of transformers.

6. Diodes as components of a circuit board

Diodes are among the most important components of a circuit board. Their primary purpose is to permit the current flow only in one set direction. The current can either go from the positive terminal to the negative terminal or vice versa but never both at the same time. So, a diode achieves this by offering infinite resistance in one direction but offering zero resistance in the other. Therefore, we can utilize this feature for blocking the flow of current in the undesired direction. One of the most popular diodes is the LED diode or commonly known as a light-emitting diode. We mostly use these diodes for emitting light. These diodes are very easy to solder. However, we must orient them correctly otherwise the LED might not lighten up.

7. Transistors as components of a circuit board

Most electronics experts credit transistors as the founding block of electronics as we know it today. These are very important components of a circuit board. You can find billions of transistors within a single IC. However, we shouldn’t think of them as complex instruments. Rather they are just ordinary electrical switches and simple amplifiers. Transistors come in all sorts of shapes and sizes. However, the most common kind is the bipolar transistor. Other categories include PNP and NPN variants.

There are 3 pins within a bipolar transistor. There is a collector, an emitter, and then there is the most important one i.e. the base. When a tiny amount of current passes through an NPN transistor then it goes from the base to the emitter. This, however, sets off another setting and the current becomes much large. This larger current then passes from emitter to the collector.

On the other hand, the PNP transistor behaves in complete opposite to the NPN transistor. There is another popular type of transistors that we call the FETs or simply Field effect transistors. They allow current to pass through them by using the existing electric field to trigger another circuit setting.

8. Silicon-Controlled Rectifier (SCR) as components of a circuit board

These are integral components of a circuit board and that is why enthusiasts love to use them. People also call them thyristors because they are quite similar to diodes and transistors. Some experts suggest that these resemble two transistors functioning in conjunction with each other. These have four silicon layers and they only contain three leads. They don’t function as amplifiers rather they just act as switches.

One of the major points to note is that we only need a single pulse for activating the switch. On the other hand, we have to continuously supply current to a transistor so that it goes through amplification. Hence, they are more suitable for switching power in big amounts.

9. Integrated Circuits as components of a circuit board

We also know them as ICs and they are critical components of a circuit board. So, when we shrink down some electronic circuits and components and then embed them onto thin films of a semiconductor then they are known as ICs. They allow us to embed electronic many components in a single chip. This amazing capability enabled us to manufacture the very first calculators. So, now they are allowing us to make cutting edge smart devices and revolutionary supercomputers. ICs serve as the central processing unit or essentially the brain of a larger circuit. ICs have different types but they are mostly available in plastic encasing of black color. They usually have visible contacts such as leads coming out of their structure. They also sometimes have contact pads underneath them.

10. Crystal Oscillators as components of a circuit board

These are the most essential components of a circuit board in complex devices. We mostly use them in clocks because they allow us to make critical circuits. These critical circuits allow us to maintain a stable yet accurate time. They include a piezoelectric which produces a cyclic electronic signal. The piezoelectric is basically a crystalline material which produces signals upon its oscillation. We design them in such a way that they vibrate at a stable rate. Their vibration is linked to a certain frequency. Hence, we can make economical and accurate clocks by using them. Hence, we also use them in other important devices as well such as quartz watches and microcontrollers.

11. Switches and Relays as components of a circuit board

They are the most basic components of a circuit board yet we often forget their importance. A switch allows us to control the flow of current within any given circuit. The switch allows us to move between closed and open circuits. They come in all sorts of forms and dimensions. However, some of the common ones include sliders, lever, keys, push buttons, and rotary. On the other hand, an electronegative switch is known as a relay. A relay operates through a solenoid. Hence, when the current flows through it, the solenoid acts as a temporary magnet. Hence, they operate as switches and can, therefore, enhance smaller amounts of current into larger amounts.

12. Sensors as components of a circuit board

Sensors are those components of a circuit board that are able to detect the change in their atmosphere. Once they detect this change, they tend to generate a signal to reflect it. This electronic signal is then sent to different components of a circuit board. So, sensors basically convert physical energy into electrical energy. Hence, we often consider sensors as transducers (because they are able to convert energy from one form to the other form).

Sensors have different types and all of them have different purposes. Some of the most widely known sensors include a temperature sensor, humidity sensors, pressure sensors, light sensors, and motion sensors. They are very common and we often use them in our daily life. For instance, we use LEDs for the detection of IR signals in a TV remote. We also use fire and humidity sensors in fire and smoke alarms. So, we can use sensors as components of a circuit board in order to optimize different industrial processes as well.

Now that you have learned about the PCB components then you should think about making a PCB project of your own. If you want to order parts or need any further guidance then you should reach out to MOKO Technology.