Latest forms of these components, such as which enable VFBGA (Very Fine BGA) meanwhile several thousand connection pins with a pitch of less than 0.5mm.
The BGA PCB components are assembled in a corresponding soldering process, with many factors play a role. The result of this process is usually a matt.

At this point the interaction between the physical states and the resulting electrical properties clearly.
The reference model shows the structural relationships in a simplified manner. It is based on a static, directional signal with simple ohmic. The conditions prevailing in the chip (bond wires, etc) are neglected as well known.

Static reference model between the mechanical and the electrical level during the soldering process, the solder of the balls melts with the solder paste and it forms a chemical reaction with the surface of the circuit board an intermetallic zone. Also, there is an intermetallic zone between the chip and the ball body, which, however, is pronounced at the chip manufacturer and must also be checked by him. This should normally be between the transmitter and the receiver should be stable at the milliohm level.

But all theory is gray because in practice both systematic and random occur errors and these lead to greatly changed electrical parameters and also one shiny solder joint is by no means a guarantee of freedom from errors. They range from visible deformations of the solder body in the senses of lean or fat solder joints, where there is electrical contact, up to optically well-defined solder joints with no, or sporadically falling electrical contact.

The standard IPC-A-610E plays an important role in the evaluation of a BGA PCB soldering joint role. It specifies the acceptance criteria for electronic assemblies and also specifies criteria for BGA PCB components. So for a production system solutions are necessary which ensure the conformity of the solder joints to this standard can demonstrate. This also causes structurally unstable solder joints where it is underneath mechanical stress to break and thus to loss of electrical conductivity comes avoided. However, it remains to be noted that many errors, the shape of the solder body regarding, only have electrical effects at extreme values.

Worth mentioning here are the “Head in Pillow” and “Black Pad “known phenomena. With the former effect, the solder does not melt with the solder paste and a quasi-barrier layer is formed. However, the optics of the solder joint reveal this typically not. The main causes, in this case, are contamination of the ball surface.

The problem with the black pad is more towards the circuit board. Here the reacts ball with the solder paste but below it also creates a layer with reduced or complete lack of conductivity.

However, they do lower resolution and thus problems in the detection of liability weaknesses in the intermetallic zones. AXOI devices combine AXI and AOI in one system

They are also capable of failing BGA PCB soldering joints on incorrectly placed chips due high-density BGA assemblies with conductor tracks completely embedded in the circuit board are pushing against it.

Put reliable methods like ICT and FPT aside for years. As groundbreaking the so-called boundary scan method, which is based on IEEE1149.x is standardized and works without an adapter. Starting from the discussed production requirements, crystallize for complex BGA assemblies focus on two technologies – X-ray systems in the form of AXI / AXOI and as an electrical test device boundary scan system. Both procedures are examined in more detail below.

Make full use of X-Ray’s potential even if X-ray technology is basically able to use the BGA. Looking at balls is just a necessary technical basis. The actual customer benefit is primarily defined by technological device design.

X-ray systems are used in modern SMD production either directly in or next to the production line for fully automatic X-ray inspection (AXI) used. In summary, AXI systems for use in SMD production lines at BGA Assemblies meet a number of basic criteria, such as:
• Complete inspection according to IPC-A-610E
• Low slip
• Low rate of ghost errors (false alarms)
• Throughput in the area of ​​the beat rate of the production line (in-line operation)
• Automatic error detection
• Simple program generation
• Intuitive user guidance
• Support for Statistic Process Control (SPC)

The IPC-A-610E addresses criteria such as those related to the BGA PCB components solder ball offset, solder ball distance, solder ball shape and pores (air pockets) in the soldering.

Particularly efficient to meet the requirements of the IPC-A-610 3D AXI systems based on tomosynthesis are to be checked, e.g. the OptiCon X-Line 3D from GÖPEL electronic.

The examples in Figure 3 show an example of a ball and its ball image processing evaluation. The pictures show the section through the middle of the BGA soldering balls.
The example below shows that the amount of solder applied has an influence on void formation. 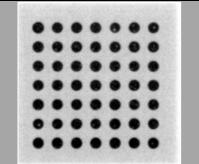 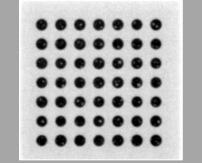 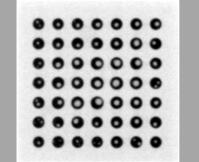 Typically, the void test does not use the volume, but the void area certainly. Mainly the void area is related to the ball area and thus the void percentage issued.

The lower left example shows the automatic void determination. The IPC-A610E limit for the maximum proportion of void in the total solder joint is 25 percent. 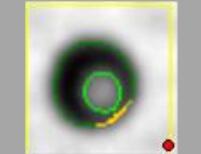 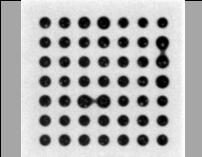 Short circuits between two balls; these can also by means of an electrical test can be detected

In addition to assessing the shape, presence, and pores of the solder balls, according to Figure 5 also short circuits between the solder balls are evaluated.
If this BGA PCB is mechanically or thermally stressed, it will be expected to fail. Such an inclined position can include: stray components are caused that come to rest under the BGA.
The error scenario of the “head-in-pillow” effect has already been discussed. It is also known under the synonym “trailer”. One way of this failure scenario safely and to be able to test reproducibly is the use of a “tear-drop” pad design. in this connection, the connection pads of the BGA PCB are not circular, but tear-shaped. 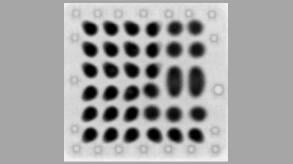 X-ray image of a BGA with tear-drop design; the round pronounced soldering are trailers 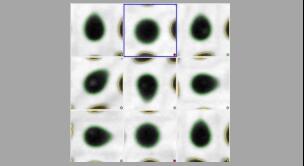 X-ray image of a BGA with tear-drop design; the round pronounced soldering are trailers

Detection of trailers by tear-drop design

If a ball melts and combines with the solder paste underneath, it is shaped the typical teardrop shape. If no connection is established, the ball retains its circular shape and can be measured such as roundness, axis ratio or ball are abe sorted out.

The teardrop shape reduces the distance between two pads and it can cause injury of the minimum electrical insulation distance.

Now, a ball shape assessment is often not enough to make it bad differ. If there are assemblies on one side, you can use high-resolution 2.5D x-ray oblique radiation examined the transition between pad and solder ball become. If the constriction is recognizable here, this is an indication of a trailer.

This design-integrated test electronics is serialized via a so-called test bus driven. The virtual needles are actually boundary scan cells, which are in form a shift register (boundary scan register) can be interconnected. By the electrical test of BGA soldering joints succeeds in the synchronous handling of the problems of the cell. However, the fault location cannot be used for directional connections to be determined exactly, then processes such as MXI are required again.

With multi-point connections, e.g. Bus structures, on the other hand, is a pin accurate fault diagnosis completely given. But the charm of the boundary scan process is also its high test speed and flexibility when testing prototypes.
Sophisticated system solutions such as the software platform SYSTEM CASCON ™ [6] from GÖPEL electronic offer automatic test pattern generators (ATPG) which thousands of test the solder joints in parallel in a few seconds and with automatic pin error diagnosis can, without the need for an adapter. It can hardly be more cost-effective.
Boundary scan is a structural process and independent of that in the chip integrated functional logic. The bottom line is that each pin is individual and can be tested independently. This also makes the process very easy to use combine stress tests in which e.g. due to thermal stress in a climatic chamber attempts are made to cause defective solder joints to fail. It also offers for this GÖPEL electronic pre-assembled hardware modules, such as the TIC03 from the SCANFLEX series.
But Boundary Scan also has its strengths in the laboratory. For quick prototype verification targeted check of certain signals is often relevant for the designer. Here graphic tools like Scan Vision ™ achieve the best results.

Representation of layout and schematic for interactive pin toggling

They not only allow cross-referencing between layout and schematic but also the activation of the boundary scan cells by simply clicking on the corresponding pin.
The resulting logical signal states are then transferred from the user definable color schemes visualized.
Special packages such as the PicoTAP Designer are also available for the introduction of Boundary Scan studio [8] from GÖPEL electronic available. They already contain all the tools including ATPG and debugger, as well as the necessary hardware to get started immediately.
This also includes a hardware module for testing I / O signals. The special charm these packages are of course their extremely good price/performance ratio.

The very existence of the technologies and system solutions discussed so far is enough for one manufacturing with the highest quality standards is not enough. Rather, the use of X-ray systems and boundary scan systems in the production of BGA PCB assemblies a thorough analysis of the entire manufacturing situation. Above all, they play precise knowledge of the errors to be combated and their statistical distribution authoritative role. In total there are over 100 parameters that define an influence the optimal inspection and test strategy. In this respect, it is at this point impossible to name “the” strategy. But the fact is that the combination of AXOI and Boundary Scan at BGA provides 100 percent error coverage can guarantee and the greater the proportion of BGA is the more important precisely these techniques. From today’s perspective, they are for high-density assemblies in perspective the only solution. What a process line looks like for such situations could be seen.

The basic idea is to establish a sensor behind each process step and the statistical error information holistically on the processes fed back. The AXOI system can due to its high inspection speed qualify the module according to IPC-A-610E and, for example, also the inner meniscus measured by TQFP components. The still missing mechanical fault coverage is ensured by the integrated AOI system. MXI is used for precision analysis commitment. The sensors shown in blue are all in the GÖPEL product portfolio electronic included.

BGA components are an important component of complex circuit boards and enable ever higher integration densities and improvements in the electrical parameters. The continuously decreasing access makes the use more appropriate countermeasures in the form of alternative inspection and test procedures are essential.
In practice, 3D-AXOI machines, in particular, have a combined AXI / AOI system and Boundary Scan as the electrical test method for the greatest potential
Solve the access problems. Both methods complement each other perfectly enable fault coverage against 100% for BGA soldering joints. It also offers boundary-scan fundamental future security as it progresses on standardization within the framework of the IEEE. That from GÖPEL electronic the developed concept of embedded system access (ESA) involves these standards and complements them with further technologies to extend the fault coverage [11]. Thereby the combination becomes even more attractive.
For optimal use of the discussed system solutions, however, there is one in the first place accurate analysis of the process situation is essential because if the buggy bride is not dancing want to help all technology fiddling nothing.